The Hill of Tara in the Boyne Valley is ceremonial site associated with kingship rituals.

From the time of the first Celtic influence until the Norman invasion in the 12th Century, the Hill of Tara was Ireland’s political and spiritual capital.

The King of Tara represented a very old ideal of sacred kingship in Ireland, imbued with mythical aura. Many Kings of Tara were also High Kings of Ireland.

The summit of the hill is enclosed by an Iron Age Royal Enclosure known as the Fort of the Kings. There are two interlinked earthworks within the enclosure, Cormac’s House and the Royal Seat. In the middle of the Royal Seat is a standing stone known as the Lia Fáil (Stone of Destiny) at which the High Kings were crowned. According to legend when the true King held the stone, it would let out a screech that could be heard all over Ireland. 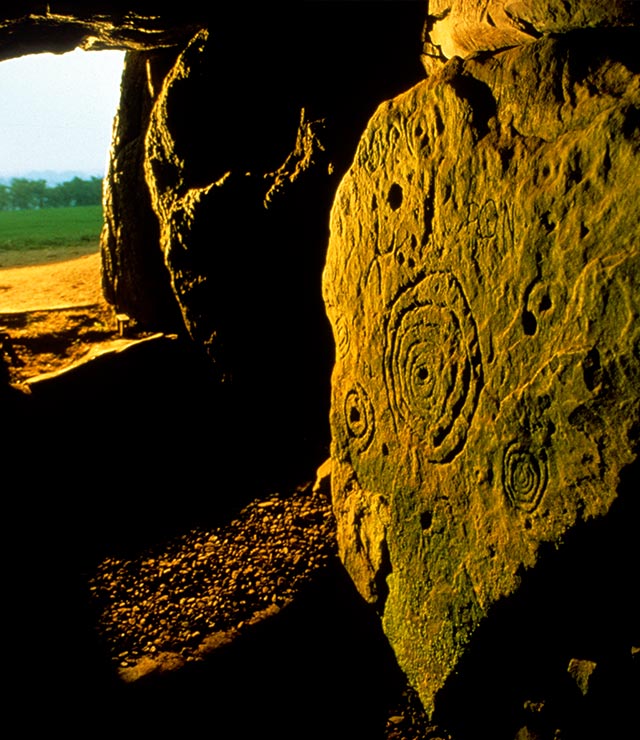 The Mound of the Hostages

The importance of the Hill of Tara predates Celtic times, the oldest monument on the hill is a Neolithic passage tomb known as the Mound of the Hostages, built about 5000 year ago.

It is circular in form, roughly fifteen metres in diameter and three metres high. It is built in the same style as the Newgrange tomb, although on a much smaller scale. The structure is dome-shaped with an inset for the entrance and a small doorway, set almost one metre into the side of the monument.

The doorway is framed with undecorated standing stones. As with other passage tombs the entrance is aligned with the rising sun at certain times of the year, in this case the chamber is illuminated on the mornings around Samhain (early November) and Imbolc (early February). Inside, the passage into the Mound of the Hostages stretches for four metres in length, one metre in width, and is 1.8 metres (6 feet) high. It contains decorated stones with images of swirls and circles.

The mound was used for burials from the early Neolithic up about 1600 BCE. There were up to 500 bodies buried in the mound, organised into layers under the passage. The dead were most often cremated, and their ashes and grave goods spread on the floor of the tomb. These grave goods include decorative pottery and urns, stone beads, and bone pins. The remains were then covered with stone slabs. With this method, layers of ashes and stone built up over time and successive burials. More burials occurred at this site in the Bronze Age, and space in the passage eventually became unavailable, so the bodies were then placed in the mound itself. Over 40 remains have been removed from the mound. They had been buried in the Bronze Age style, with inverted cinerary urns placed over the cremation ashes. The full body of a Bronze Age adolescent was also discovered in the mound. The body was placed in a crouched position in a simple pit dug in the mound. Grave goods found with the body include a decorated bead necklace, a bronze knife suggesting that he was a person of importance.

Hill of Tara - A Powerful Place

The fame of the Hill of Tara (“The Hill of Kings”) spreads wide and deep through Irish history. William Butler Yeats called it “the most consecrated spot in Ireland.”

In Gaelic, Tara is Teamhair, and the name may refer to the burial mound of Tea, ancestor queen and goddess of the Celts. Or it may come from the same root as the Greek temenos, meaning sanctuary.

Tara has been a sacred location for millennia, a veritable cemetery of the renowned. It probably first came into use around 3500 BCE. Some 130 monuments, including barrows, Neolithic tombs, and circular Iron Age forts, have been identified in the immediate area. Most of the sites remain unexcavated, although unscientific digs in the nineteenth century left parts of the area pockmarked and disfigured.

Early Irish sagas describe Tara as the home of the god Lug, that great master-of-all trades. Its greatest prestige was during the time of the Celtic High Kings of Ireland, and legendary king Cormac Mac Airt was inaugurated on the hill along with 140 other kings over the centuries. The story goes that the royal contender had to be accepted by the Lia Fáil , the phallic standing stone erected on the hill. If the Stone of Destiny approved, it would screech out the successful candidate’s name. King Laoghaire (whose Druids lost the contest with St Patrick) is purported to be buried upright, dressed in his armour, in a ring fort on the hill.

Seventh-century documents describe the battles between dynasties to claim kingship of Tara and hence kingship over the whole of Ireland. Tara continued to be the nominal seat of kingship until it was abandoned in 1022.

Although the Hill of Tara is a “must-see,” there isn’t as much to see as you might expect. It’s a gentle hill, undulating with grass-covered depressions and elevations of ring forts, barrows, and misguided explorations. Signs give fanciful labels based on the fevered imagination of nineteenth-century excavators. It may be romantic to think that one is “seeing” the remains of the Royal Palace, the Royal Banquet Hall, the Royal Enclosure, or Grainne’s Fort, a burial mound associated with “The Pursuit of Diarmuid and Grainne”. But is it accurate? In most cases, not.

The imaginatively named Mound of the Hostages is a passage grave built around 3000 BCE, the same time as the massive mounds at Brú na Bóinne (Newgrange, Knowth and Dowth). It is 21 m (70 ft) in diameter and 2.7 m (9 ft) high. Once it held over 200 Neolithic cremations and forty burials from the Bronze Age, proof of its long-standing importance as a sacred site. One complete skeleton of a young man was found with a dagger and a bead necklace of jet, amber and bronze testimony to far-flung trade routes. Two beautiful gold torcs dating around 2000 BCE were also found in the mound and are now at the National Museum, Dublin. The mound has many associations with the moon, including an interior wall carving of thirteen spirals, perhaps representing an early moon calendar.

The passage is oriented toward the rising sun on the cross-quarter days in early November and February (Samhain and Imbolc). Legend and archaeology come together, for both indicate that Tara was important at the beginning of winter, what we now call Halloween, a time when the spirits of the dead are especially accessible and the beginning of spring, as indicated by the references to the White Cow and Imbolc. How appropriate that both should be marked in this sacred landscape of death and rebirth.

Walk slowly up the Tech Midchuarta (the misnamed “Banquet Hall”), the ceremonial avenue constructed between the fifth and eighth centuries CE. High banks on either side isolate you from the outside world, creating an almost subterranean entryway to this powerful place. Gaps (perhaps a total of seven) provide glimpses of the tombs of ancestors, which legends claim to have been kings and queens. Center yourself and be present to your surroundings and you may begin to feel their presence, especially around Samhain!

Wander off the labelled path and find the faery hawthorn tree, dripping with clootie cloths, on the west slope of the Hill of Tara. That’s a fine place to meditate. See if you can get a feeling for this land, location of so many burials and celebrations, for thousands of years. What is it about this place that generates so much importance? Is there power innate within the land, or does the power come from the human pageant that has taken place upon it? Or can the two be separated?

Contemplate the relationship of stones and kingship: Arthur proved he was the awaited king by pulling a sword from a stone; the High Kings had to be approved by the screeching Lia Fai. Ponder the polarities of masculine and female power – the phallic Stone of Destiny and the fertile land of Tara “herself” – both considered vital to validate the High King.

Although the Hill of Tara is only 200 meters (650 feet) high, you can see 40% of Ireland from its summit. On a clear day you can see the glimmering white quartz facade of Newgrange from “The Banquet Hall.” There’s a reason (actually, several) that this hill as been important in history and folklore for millennia. 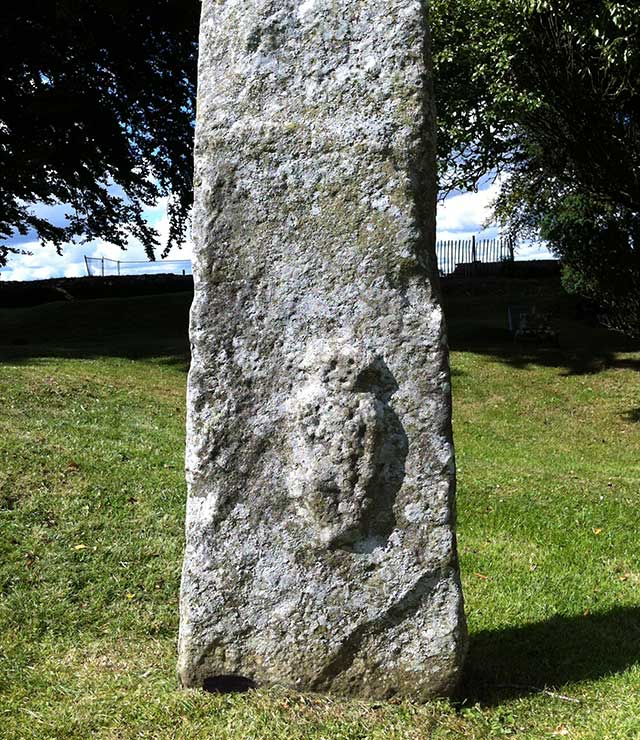 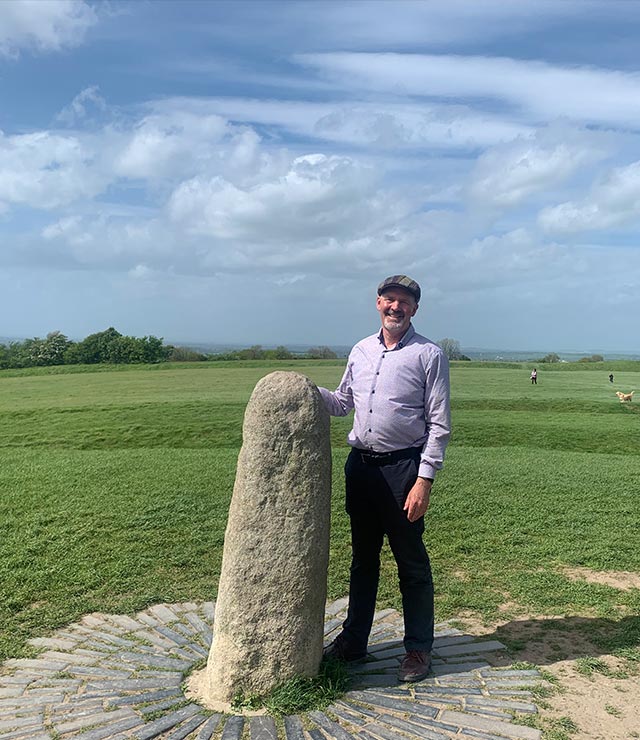 On the Hill of Tara during the annual festival of Samhain the malevolent fairy Aillen would rise from the Underworld to burn the halls of Tara while the Fianna succumbed to an enchanted sleep rendering them powerless to defend themselves.

John L. Stoddard published an account of his visit to New Grange and the Hill of Tara in 1901.

Tara: “On every side the country falls away in gentle undulations to the distant horizon, and one looks off on an unbroken circuit of as soft and beautiful scenery as even Ireland can reveal.” 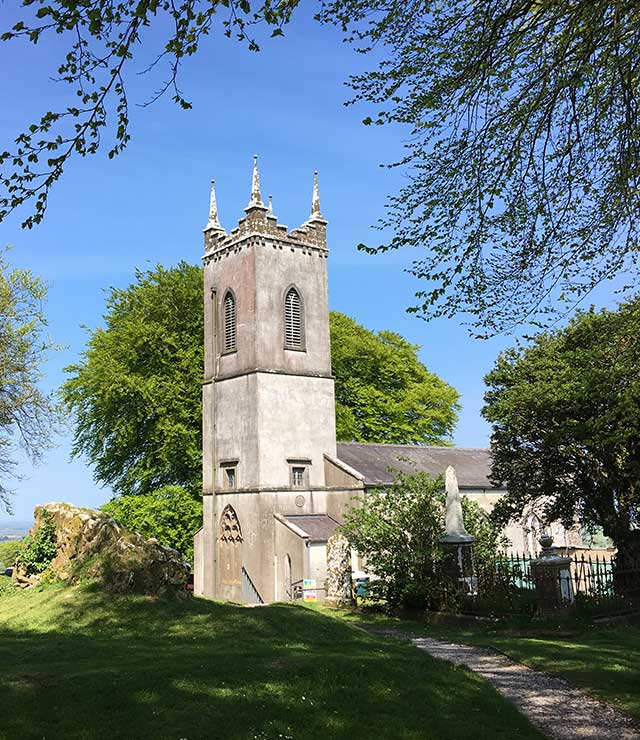