Knowth is a Stone Age Passage Tomb in the Boyne Valley and together with Newgrange and Dowth are the principal sites of Brú na Bóinne UNESCO World Heritage Site.

Knowth is the largest passage tomb of the Brú na Bóinne complex.

The site consists of a large mound (known as Site 1) and 17 smaller satellite tombs. The mound is about 12 metres (40 ft) high and 67 metres (220 ft) in diameter covering about 1 hectare (2.5 acres). It contains two passages placed along an east-west line and was originally encircled by 127 kerbstones of which 124 are still in place.

The large mound has been estimated to date from between 2500 and 2000 BCE. The passages are independent of each other, in that they lead to separate burial chambers. The eastern passage arrives at cruciform chamber, similar to Newgrange. It contains three recesses and basin stones into which the cremated remains of the dead were placed. The right-hand recess is larger and more elaborately decorated with megalithic art than the others, which is typical for Irish passage graves of this type. The western passage ends in an undifferentiated chamber (not have a definite chamber but rather a widening of the passage that defines the chamber). This chamber is separated from the passage by a sillstone. The chamber seems to have also contained a basin stone. This was later removed and is now located about two-thirds down the passageway. 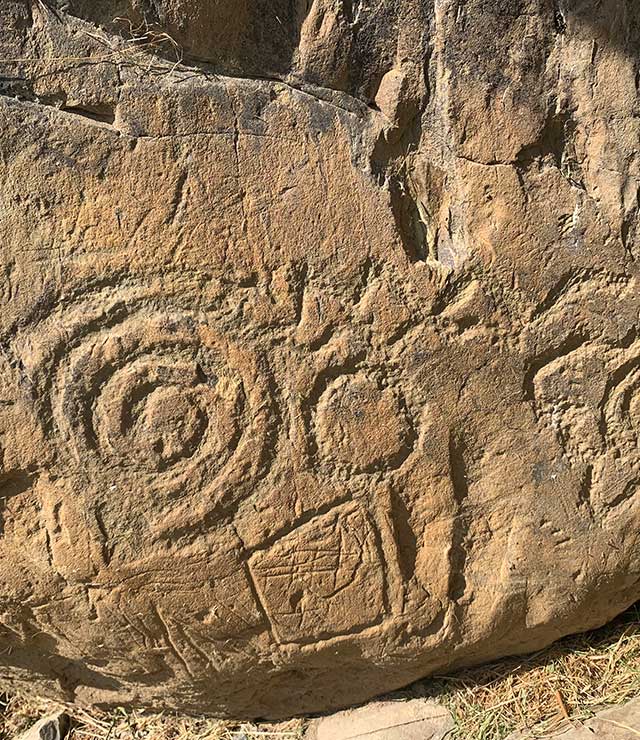 Knowth contains more than a third of the total number of examples of megalithic art in all of Western Europe.

Over 200 decorated stones were found during excavations at Knowth. Much of the artwork is found on the kerbstones, particularly approaching the entrances to the passages. Many of the motifs found at Knowth are typical: spirals, lozenges and concentric circles. However, the megalithic art at Knowth contains a wide variety of images, such as crescent shapes.

Interestingly, much of this artwork was carved on the backs of the stones. This type of megalithic art is known as hidden art. This suggests all manner of theories as regards the function of megalithic art within the Neolithic community who built the monuments in the Boyne valley. It is possible that they intended the art to be hidden. It is also possible that they simply recycled the stones and reused the other side.

There is some evidence for late Neolithic and Bronze Age activity on the site at Knowth.

Most of this stems from the existence of a grooved ware timber circle located near the entrance to the eastern passage. Archaeological evidence suggests that this was used as a ritual or sacred area after the great mound at Knowth had already fallen into disuse. Evidence for ritual consists of a large number of votive offerings found in and around the immediate areas of the timbers that formed the circle. The Normans used Knowth as a motte in the 12th century.

The hill at Knowth fell into disrepair, and the mound or cairn slipped, causing the entrances to both passages to be covered. The site remained practically unused for a period of two thousand years. The site was briefly used as a burial site; some 35 cist graves were found on the site during excavations. These seem to be Celtic burials.

In the late Iron age and early Christian period, it became a hill fort with encircling ditches and souterrains added. By this stage, Knowth became a habitational site for the first time. Two ditches were dug, one at the base of the mound behind the kerbstones, and the other at the top. At this stage, the entrances to both passages seem to have been discovered. Evidence for this include early Christian graffiti on the stones in the eastern chamber. Four names were carved in ogham. It seems it was at this stage that the basin stone from the western chamber was moved in an attempt to remove it and was abandoned in the passage because it got stuck. At this time, Knowth was a very significant political site and was the capital of the Kingdom of Northern Brega.

After a brief military interlude with the Norman invasion of Ireland, Knowth fell into the hands of the monks at Mellifont abbey. It seems that the mound was then again used as a grange or farm. Stone walls were built on top of the mound, and stone buildings within the walls. After the dissolution of the monasteries, the site was used mainly for agricultural purposes until most of the site was purchased by the state in 1939.

The east-west orientation of the passages at Knowth suggests astronomical alignment with the equinoxes. The alignment at Knowth does not occur today. This is due to a number of factors. First of all, the passages were discovered by later settlers and were, to some extent, destroyed or incorporated into souterrains. In other words, the original entrances to the passages were distorted or destroyed, so it is difficult to establish if an alignment existed in the first place. Secondly, the recent excavations (1962 onwards) under Prof. George Eogan resulted in the erection of a concrete slab wall inside the mounds west entrance, restricting any investigation into the possible alignments. It seems likely that the passages were intended to align.

A brief excavation of the site was carried out in 1941 by Professor Macallister. However, major full-scale excavations began on the site in 1962 and were undertaken by Professor George Eogan of University College Dublin. When his excavations began, very little was known about the full extent of the site. The entrances to the western and eastern passages were discovered in 1967 and 1968 respectively, and, slowly, the layers of activity at the site of Knowth were uncovered. The excavation has produced numerous books and reports on the findings. The archaeological excavation of Knowth East ended any chance of research on alignments when Professor George Eogan erected a concrete wall across the east-passage entrance. The most extensive research on alignments and astronomy at Knowth was carried out by American-Irish researcher Martin Brennan. 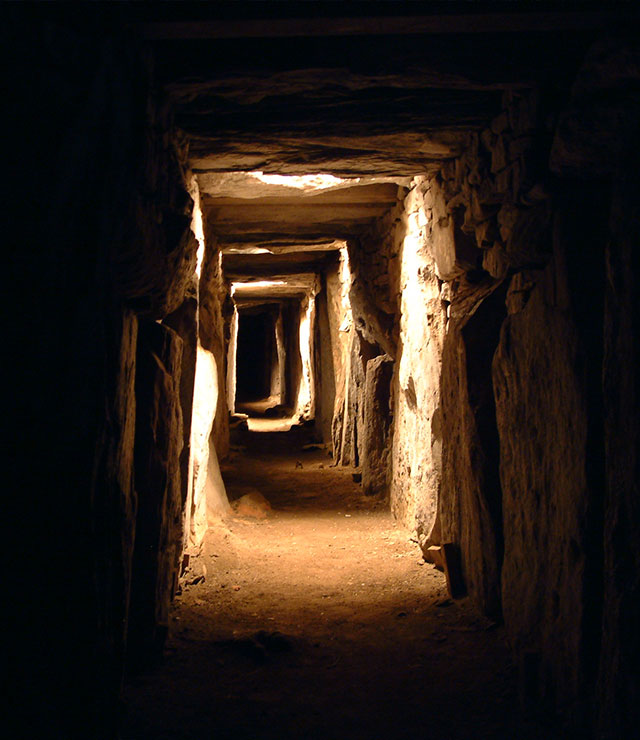 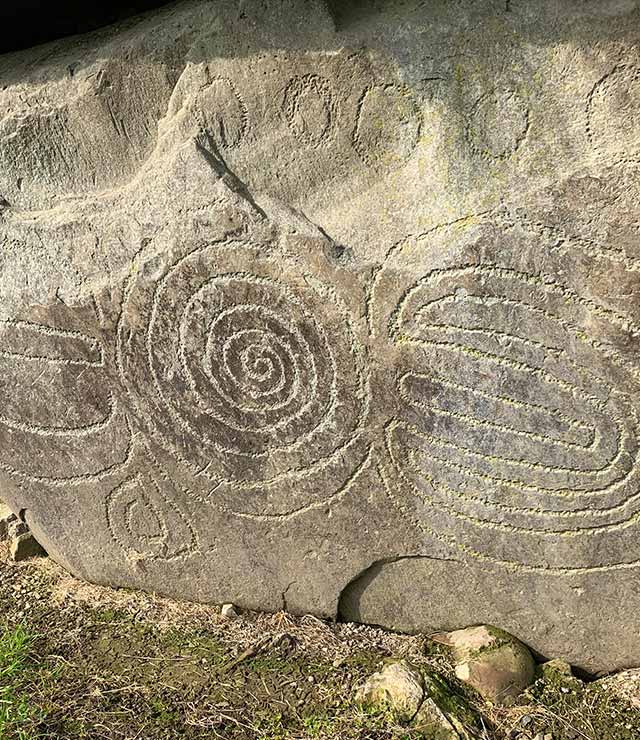 There is no direct access. All tours begin at the Brú na Bóinne Visitor Centre in Donore, County Meath. There is no access to the grave chambers of Knowth. Visitors are able to see down the eastern passage and visit the modern interpretive room constructed just off this passage.